Wor(l)d of the Present: CHEMTRAILS 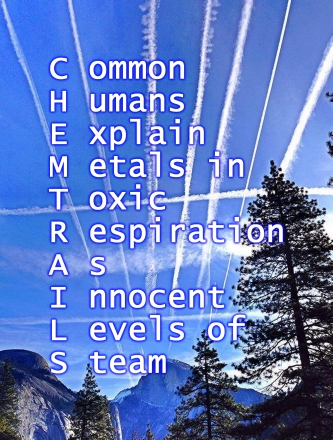 I used to believe what I was told in school during the physics lessons, that the trails the jets were leaving in the air were only made by the water vapour that came from the engines, and which would stay visible shorter or longer depending on local air temperature and humidity. Even when people told me otherwise, I would dismiss their claims as being possible but improbable. 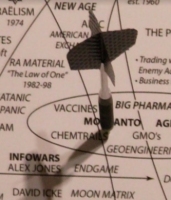 Today this came up because I decided to let destiny pick the acrosstic, by throwing a dart at the Q Map to decide the next topic. And so, chemtrails became my "Wor(l)d of the Present". And of course the Grand Overall Design wouldn't gift me the word without also giving me the Acrosstic to go with it. And so this page was born.

I started really believing in chemtrails when one day we were out one summer evening, because the kids were doing a four day walk event. As we sat there under a bright blue sunny sky eating our ice cream, I noticed a very regular pattern of jets coming over. Their trails were thin, so no cause for alarm, but the regularity of the pattern surprised me. It was much like the photo above. And within minutes after they had disappeared, the sky was totally overcast! I've never seen the weather change so abruptly in circumstances where there was hardly any wind.

Of course there are several stories as to the motive for putting something in the jets in order to spray it on the air, and by implication, on us humans. Weather control is the most 'harmless', but some of the components that are apparently used are metals which would also be hazardous to our health. Funny enough, I went looking for images to use on this page, and even found photos from inside planes, which were truly equipped with tanks and tubing to spray the contents, and photos where the chemtrails are so thick and wide, that they could not possibly be just jet exhaust. Also, the places where the fumes emanated from were not always corresponding to the placement of the engines.

And of course the connection to my recent words was there in the search result, because multiple sources confirmed Trump has talked with the FAA about chemtrails, and even claims to have stopped chemtrails altogether. See this link for a nice look down tyhe rabbit hole of today's world....