Wor(l)d of the Present: CONSCIOUSNESS2 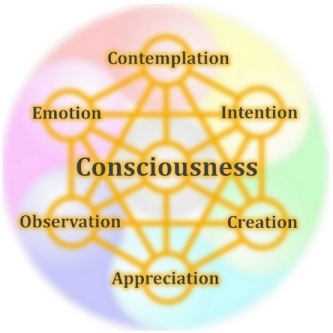 Listening to Wallace D. Wattles' treatise on how to become abundant, I intuitively felt there was another SevenSphere lurking there. I quickly found "the Six IONs" that I later on recognised as the satellites of a SevenSphere that has Consciousness at it's core. They are Observation, Emotion, Contermplation, Intention, Creation and Appreciation. I initially placed Observation in the Cyan starting sphere, but after completing the SevenSphere it felt wrong: It felt like "Seeing is Believing", and the Formless Substance does not work this way: instead, Appreciation or Gratitude is the starting point. It brings you to only those cycles you appreciate, or rather "Believing is Seeing".

If you start not from appreciation but dislike, you embark upon a totally different course: you will put your immense power of thought on fighting the 'evil', thus giving it more energy. On the other hand, if you start from appreciation, which emits gratitude to the Grand Overall Design, it will work towards bringing you more of the same. You start observing more of what you appreciate, your emotions will become ever more positive, contemplation will refine the ideas you have about your wishes, and will strengthen your intentions, leading to the creation or manifestation of the essence of your desires.