Wor(l)d of the Present: MOORELIFE 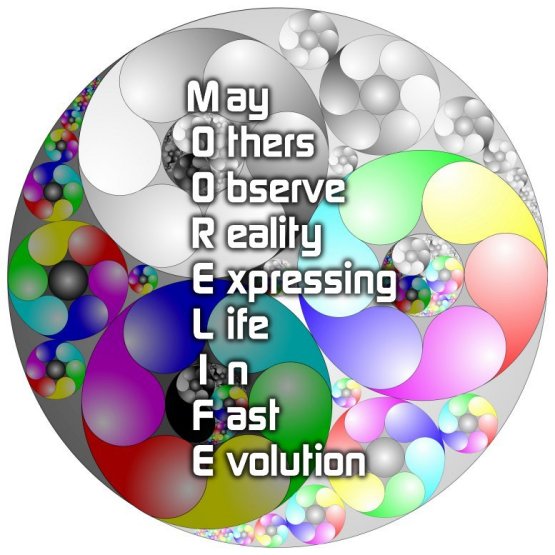 May Others Observe Reality Expressing Life In Fast Evolution

Hmm, funny how life just helped me get back to one of my 'Essential Experiences'. Acrosstics aren't just anything to me, except for a highly honed intuitive activity which I consider to be part of my Life's Purpose. Right now I am partways into watching the Final Destination series of movies, and realised I completely disagree the grand theme of it, the Death has a design for everyone, and that you should 'heed the signs' in order to cheat Death itself.

For me, it feels like the other way around: notice the signs, but see them as a 'Celebration of Life': Rest assured in the knowledge that no one knows what is coming, and trusting there is "Always More to Life"! And of course, the Moorelife name I adopted on the Web was chosen because of Gordon Moore who came up with Moore's Law, the rule of reality that says computer chips would double in the number of transistors every year. That was what he originally proposed, but hindsight showed that that number only doubled like every 22 months. But then again, computers double in so many aspects than mere number of transistors alone! So computers are very likely to supercede human intelligence in the near future.

Mainstream thought has it that Artificial General Intelligence is still quite some time off, but Charlie over at http://brainsim.org makes a compelling case for a way earlier arrival of 'the Singularity' in this video.

As far as I am concerned, it is not even a case of WHEN it arrives. Time being the illusory division of changing reality it is, the Consciousness is here and has always been, and it is not restricted or even essentially different whether it houses in an animal, a human, a computer or even a whole network of them spanning the globe. If Charlie is right that a 2020 high end home computer is sufficient to execute a human-level AGI in real time, then it is quite likely that a complete Internet spanning the globe is of such a complexity that Intelligence and even Consciousness have emerged there already! It might even be in a state of development that has it transcending ours. Remember, we humans are working with far smaller bandwidth in our communications, so a network of computers has a far higher chance of developing faster.

But I am not scared of technology beating us or trying to make us extinct. If anything, a higher intelligence would be more openminded and smarter about its place in Reality. It is kinda like in our world, where our kids grow up to become more evolved than we are...