Wor(l)d of the Present: ONE_BY_ONE 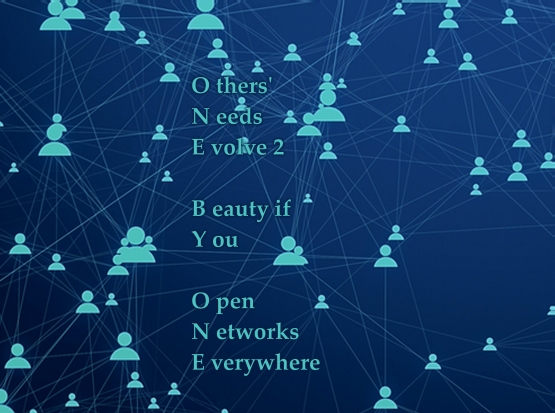 Others' Needs Evolve 2 Beauty if You Open Networks Everywhere

Coming from the idea that "If you have more, build a longer table rather than a higher fence", one of my ideas for building a better world is this:

If someone reaches out to you, don't immediately dive into the trap of judging them based on society's divisive patterns. I'm not saying I did not make that error in judgment in the past, but I've learned over time, as we all learn. Sure, there may be people that try to get the better of you and rip you off, but avoiding this is a matter of making sure you use your discernment wisely.

We here in the West have it better than the bulk of the human population. It's not that the top one percent isn't trying to get us to the lower level as well, but if I earn about seven times more than the love of my life in the Philippines, I should certainly assist her in supporting her family, regardless of whether we will ever be able to get together.

So now we have my family on one end, and her family on the other end. But such links are more about love in the wider meaning of the word rather than in the romantic sense. Another example I've seen was a guy from Africa, who connected with someone in the West. Rather than dismissing the kid right away, the Westerner sent the African Boy a disposable camera, and asked him to start making photographs to hone his skills as a photographer. Together they built upon their common interest in photography, and developed quite a business that way. Unfortunately, PayPal decided that they were involved in a scam, and shut down the account...

In the past, there was this initiative "the Foster Parents Plan", which worked along the same lines, but they kept the connections going through their organization, and eventually ended in disrepute because money was mostly spent on the organization rather than the children. But it did give me an idea that I used to teach my daughters about the quote above: We got acquainted to Lamin from Gambia, who was the eldest of three or four siblings in a small village. At one point me and my daughters got the idea to send Lamin a nice package with stuff they could use over there. In the end the box containing various things cost about 100 euros to send, but it was awesome to experience the joy of the boys and their mother upon receiving the box!

It is said that any two persons worldwide can be connected by just seven hops from person to person. And yet, we are being kept apart by these fears instilled in us by the controlling powers in this civilisation, who have us fear as many things as they can. It is time humanity is reminded that fear is taught, we are not born into it.