Wor(l)d of the Present: TEAMWORK 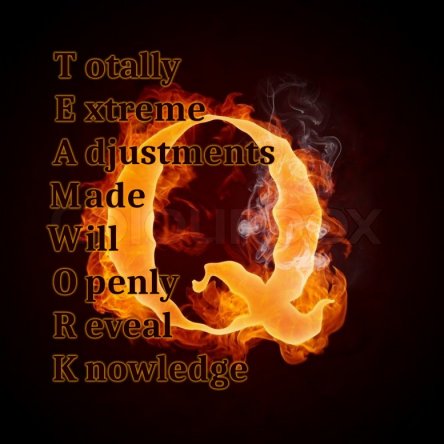 Teamwork is awesome work, but the most effective teams will be those where the members are not constrained by the team. Instead of dictating a team's way of working, merely the joined purpose of the team is enough to get power in a distributed manner rather than an hierarchical way.

A sentence I heard yesterday, in a series my daughter was watching while I was driving us home, was this: "Those who wish to leave should leave. One man committed to the cause is worth ten who aren't!". And this too is why teamwork works better if it allows people in, and also allows them to leave when their vision changes.

Secretive networks that can't fight openly will have to restrict those who want to leave from exposing their illegal activities. This may be done by getting some form of leverage over the people no longer aligned with the purpose of the organisation. And if you can't leverage them then killing is sometimes required.

QAnon is not a secretive network, everything they do is out on the Internet, being discussed by thousands of individuals from both the United States and worldwide. WWG1WGA is definitely the way they work, each human being part of it contributing to the revelation of the truth. They may not always agree with one another, but one thing is certain about them: They do not ask you to simply believe their statements, but encourage you to check the facts yourself, something anyone with a computer and an Internet connection can do.