Wor(l)d of the Present: CHANGE 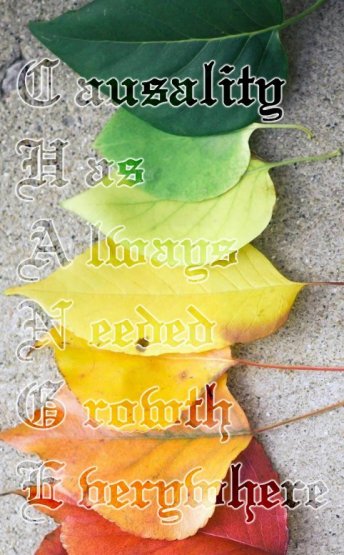 Causality, such an overrated concept. The Merovingian in Matrix Reloaded (a.k.a. the Frenchman) hailed it as being the driving force of the Universe, but in my humble opinion he is dead wrong! Going on the things I learned about quantum physics, the observer changes reality, and as such the observer becomes the cause, and reality the effect. Also, it has been shown in scientific research that cause and effect do not always happen in that same order: the day before 911 happened, the results of some very reliable random number generators that are accessible via the Internet exhibited a marked change in their outputs. This is similar to effects like humans changing the outcome of random processes by mind power only.

And it is a knock-on effect: each observer in turn creates a new reality from what he she or it observes, but it is a reality in both their consciousness, and also in the common consciousness. These two are entangled, kinda like spiritual and physical reality. Scientific progress is merely the unveiling of spiritual concepts as they come into the realm of the discovery of new scientific principles.

Creativity is the conscious and subconscious mechanism that also comes into play here: all artists produce change in physical reality as they observe their inner being, which in turn has been formed by their experiences during their lives thus far. A very nice example of this is the YouTube Channel Playing for Change, where many musical artists both famous and less known perform their covers of well-known songs, while gathering donations for good causes.

Another big player for Change is Michael Tellinger, who is driving the Ubuntu movement. They have developed the One Small Town initiative, a movement that helps towns and cities develop into self-sustained communities, which will be able to survive even if the current economic system collapses like it seems to be doing at the moment. March 2021 seems to become particularly interesting in that respect.