Wor(l)d of the Present: FORMLESS 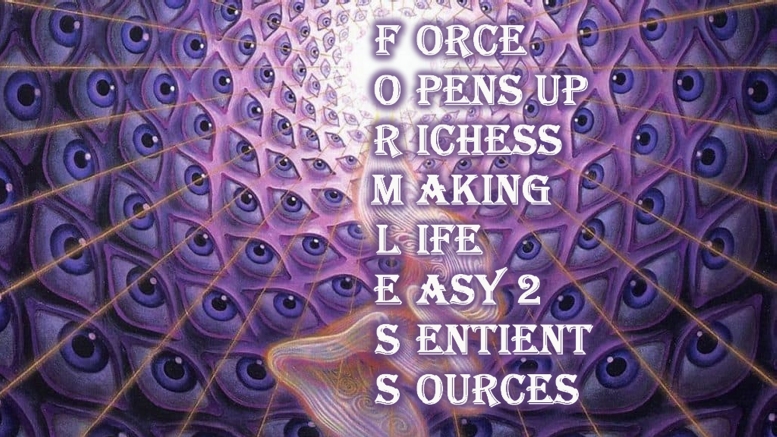 Wow, today the Wor(l)d of the Present is FORMLESS, and it comes in the form of a video, audio or E-book representing the work of Wallace D. Wattles' "The Science of Getting Rich". I've never been very positive about many of the get rich quick schemes and books, but this 66-page work from 1908 had a very extreme degree of synchronicity with my own ideas of the concept of 'Rich'. 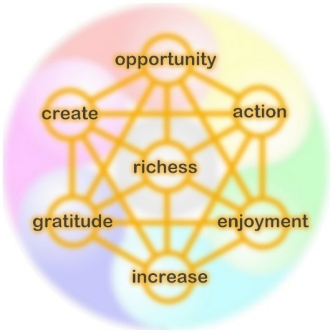 Listening to the audiobook I immediately noticed where my ideas went 'wrong'. First of all, there is the red segment in the SevenSphere on the left. I always saw this as "What I most want AND what I most want to avoid". But by labeling it 'Opportunity' it becomes a simple free will choice.

While listening, the other aspects of 'richess' became gradually apparent. Moorelife has always been my motto, and the cyan sphere at the bottom always felt like my 'starting point'. This meshed nicely with the idea in the book that the formless substance is endless, and all humans have this constant yearning for 'more'. But more can be a creative or a competitive thing. And I always felt competition wasn't my cup of tea, and Wallace wholeheartedly claimed that only creative will work in the end.

And of course the first step in increase is to already feel gratitude for all the formless substance gives you. I love the idea he called it that, even though many would call it god, allah, source, the force, etcetera. But 'formless substance' is as non-descript as possible, neither male nor female, black nor white, matter nor energy.

The idea that thought (or consciousness) is the driving force of humans implies that creation is the ongoing effect following from thought. Most people don't get to become rich because they unknowingly create conflicting thoughts and thus aren't effective creators. Still, we create the thoughts, but the formless substance will create the opportunity needed to make your thought creations come to life.

Of course, opportunities require action, or your thoughts will forever be stuck in your dreams, without ever becoming your reality. I used to be stuck in the mode that I needed to SEE one way for something to become reality before I believed I could have it. But time and time again things came as opportunities that I myself had never seen before!

In all honesty, Wallace D. Wattles created a gem of abundant wisdom, long before the Secret and all other New Age stuff that came way later. One can get through it in a little over 2 hours at normal reading speed, and using the audio book you could even plant the roots of it in your subconscious. I for one will definitely be listening to it more...